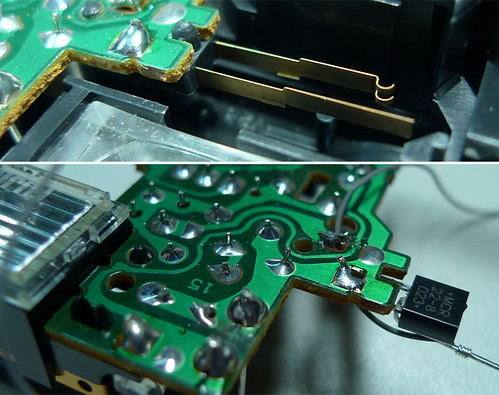 I brought the SCR gate pin and +1.5V out onto a breadboard and prototyped a simple circuit with a IR-filtered phototransistor from my parts bin. Using an IR remote, I was able to trigger the flash. However when I used a camera to take a photo of it, it didn’t work – the flash in the photo didn’t have that bright burst of light.

I knew that red-eye reduction works by firing the flash prior to the actual exposure, but I had already disabled it. The flash was indeed triggered, but lengthening the exposure time to 1 second still captured nothing. I realized the problem when I saw the flash firing through the viewfinder just before the mirror flipped up on my SLR – it was firing too early.

Modern cameras will fire a brief flash pulse, called a pre-flash, for metering just before the actual exposure. This pre-flash is what triggers the slave. This simple passive circuit works perfectly when I disabled the pre-flash on my SLR by setting the flash to Manual, but the Panasonic LX3 has no manual flash setting. Since I wanted it to work with “normal” cameras, I had to ignore the pre-flash.

Before working on such a project, you must know that the 1.5V goes through an inverter to produce 200 – 300V, which is then kept in a storage capacitor. Even if you remove the battery and the flash has been fired, there is still energy in the capacitor. Discharge it first before you attempt to work on the circuit board. Additionally, the capacitor is discharged into another transformer to generate a pulse of a few kilovolts.

I am in no way responsible for any injury or death that results from reading this post and/or trying to make your own. Please exercise caution and common sense.

Using a microcontroller would ensure a lower part count, but it meant that an additional power source was required as most microcontrollers require at least 1.8 to 2V. To keep it simple, I used a CR2032 coin cell, which I ripped out from an old motherboard along with its holder. I chose to use the ATtiny25 (which was supposed to be used for another project) because avrdude is so convenient.

I read that pre-flashes occur about 10ms or so before the actual flash, so the ATtiny looks out for a first flash and starts a timer. If a second flash occurs before the timer overflows, it fires the slave flash. The timer resets, either after sensing the second flash or after a timeout, and the cycle repeats. The firmware utilizes the power-down sleep mode when it is totally idling. The pre-flash would then wake the MCU to start the timer and enter idle sleep to keep the timer running. When the timer overflows, it is stopped and reset, and the MCU enters power-down sleep mode again.

I didn’t optimize the code too much because I might use the ATtiny4 or ATtiny9 in future. The 6-pin MCUs are really suited for this application because of its size (but the minimum voltage is still 1.8V). 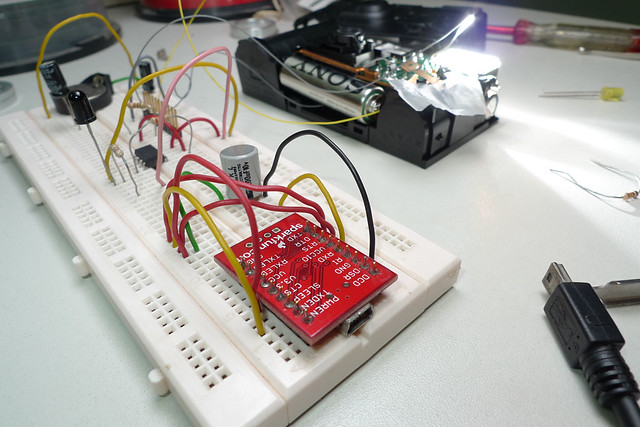 You can see the slave flash in action here, lighting up the work area by bouncing light off a sheet of paper placed above – very nice illumination. Again, I used the Sparkfun FTDI breakout board to program the ATtiny25 in bitbang mode with avrdude (same method I used for the ATtiny10).

In its current form, it’s not really ideal for use so I had to build the circuit on prototyping board. Transferring the circuit onto the prototype board wasn’t without problems. I wasted quite a bit of time troubleshooting, and killed some components, but it worked out in the end.

I killed the ATtiny25 with ~300V from the camera somehow, so I’m now using an ATtiny85 as it is the only replacement I have. After the replacement, the MCU is able to flash an LED but still does not fire the flash. I know the storage capacitor was discharged because of that high-pitch charging whine. I traced the problem to the faulty SCR, which managed to discharge the capacitor but not fire the flash. Replacing the SCR solved the problem. 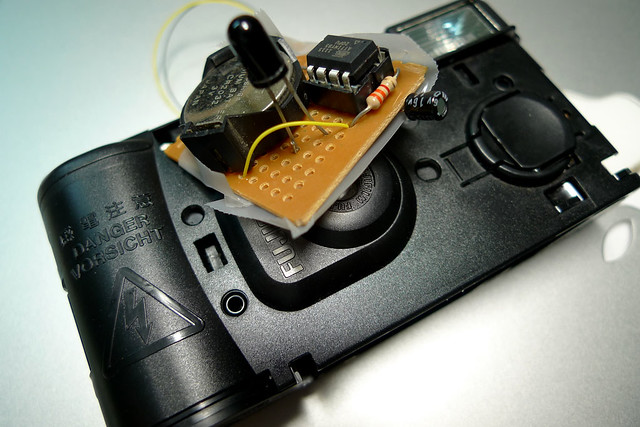 If you’re worried about getting a jolt, you should use an opto-isolated triac to trigger the flash, which is what the SPOT project does. With the triac housed inside the camera, any wires coming out of it would be safe to touch. However, I would try to avoid a 3.5mm plug for any sort of high voltage – there’s a reason why they chose such a connector for the flash PC sync port.

Sadly the “charged” neon indicator no longer works on the cameras. Do neon bulbs have a short lifespan? Other improvements might be to change the inverter on the camera to get faster recycle times, as well as an automatic charging cutoff – right now the inverter keeps working, even after the capacitor has been fully charged.

Actually I’d like to buy a cheap flash with a much larger flash head and faster recycling time, and just build the optical trigger circuit for that.

If you are interested, Sam’s Strobe FAQ is a treasure trove of information on the topic.

Here’s the schematics and source code for the optical slave flash circuit.

You may use an ATtiny25, 45 or 85 since the firmware doesn’t require any special features, and they are all pin-compatible. T1 is a SFH313FA (IR filtered phototransistor) which was left over from my university project, T2 is an MCR22-8 (SCR 600V), and the other parts are just resistors and an electrolytic capacitor.