When I saw this post on Hackaday, I thought the display looks cool. Even the people who commented on the post thought so too. This board that you see in the post monitors the bus for the Z80 in the RC2014 retro Z80 computer kit.

After some searching and the wisdom of the Hackaday crowd, I bought a few of them from eBay. It turns out that these displays are no longer being manufactured anymore. These used to be made by Texas Instruments, the TIL311 or DIS1417.

I like how the display looks like a pseudo LED matrix, forming a 7-segment display. They could have made the edges totally flat, just like a 7-segment display, but they chose to round the corners of certain digits and letters, like 0, 2, 8, A and others.

Each display has a built-in chip at the bottom of the digit, which you can see under bright lighting in close-up photos. The chip handles the latching and display logic, and contains a constant-current driver for all the LEDs to output a single hex digit (0-9, A-F). This was handy for old-school logic systems (like the Z80) because each display handles 4 bits, exactly a single hexadecimal digit. You could also interface this display easily without a microcontroller, as opposed to a display that that speaks I2C.

From the date code in the photos, you can that these displays were made in Korea in 1998. The pins look like they are made of gold, or gold-plated. 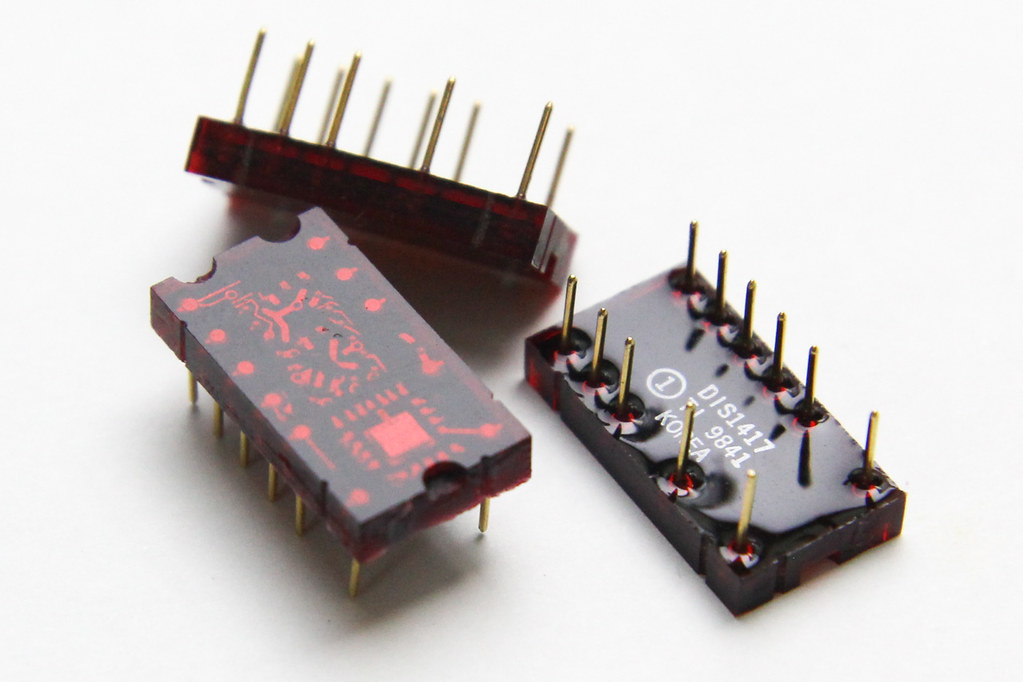 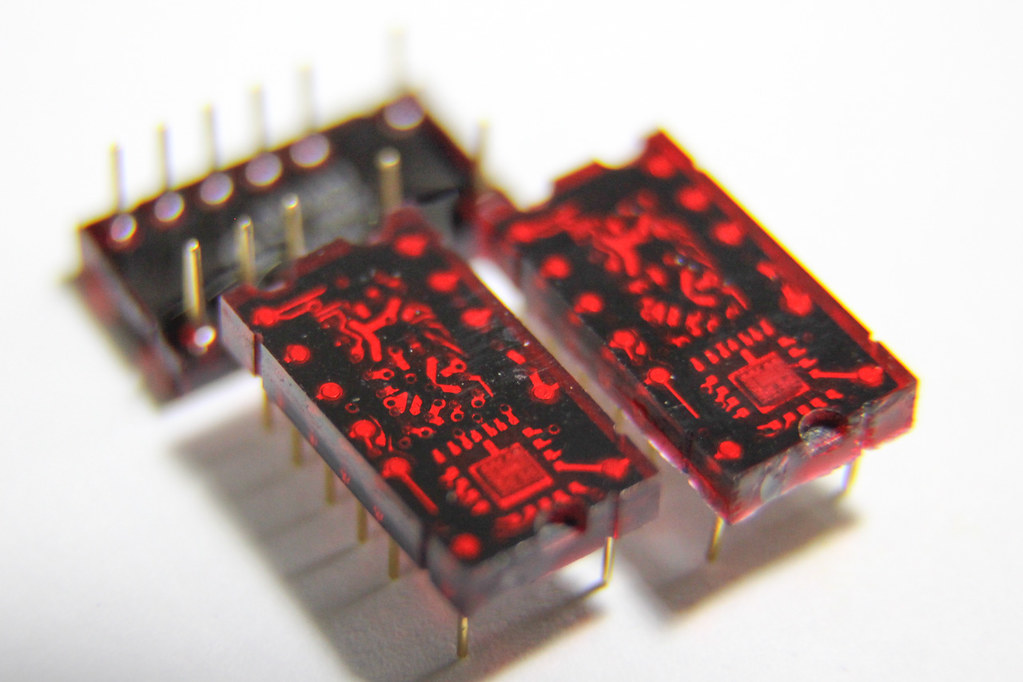 Here’s a little display board I built to see how a set of TIL311 digits would look like (as well as in the dark): 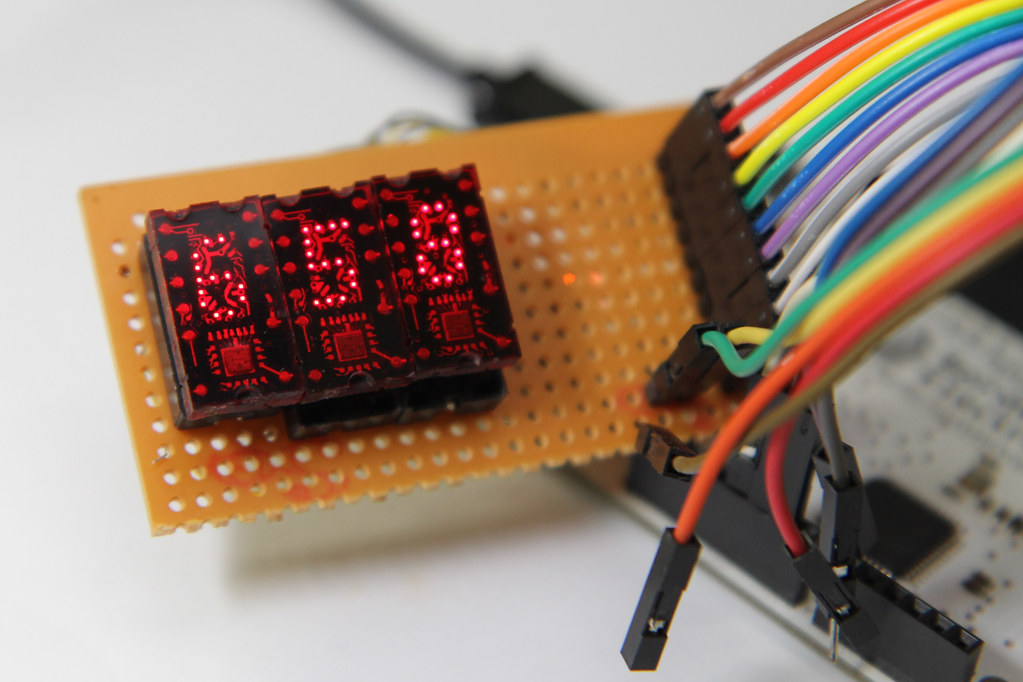 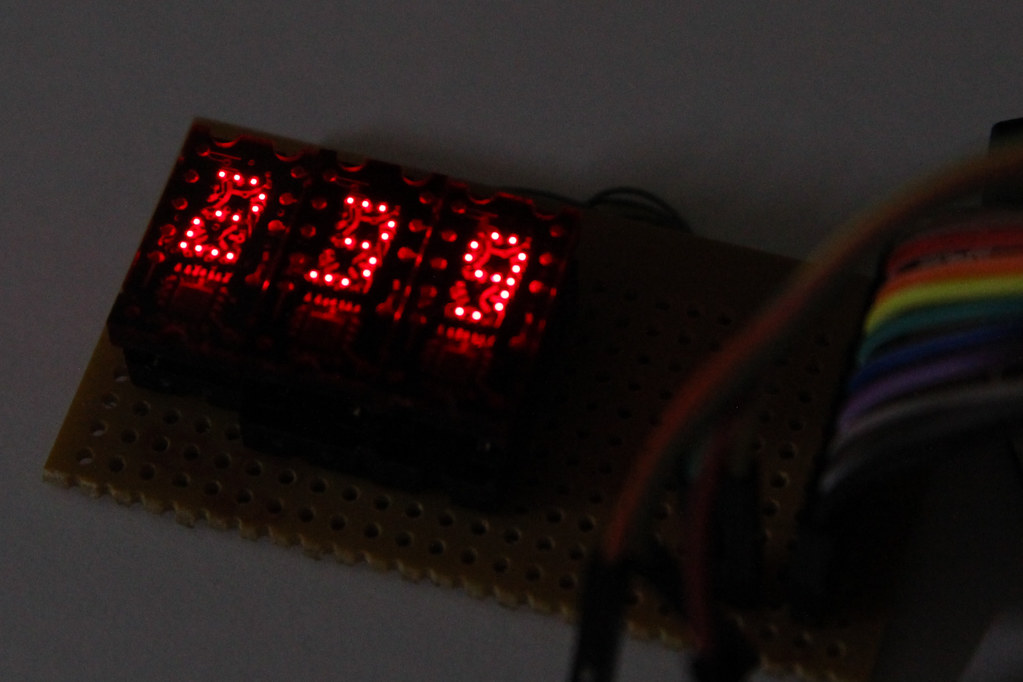 Each of these displays require 5V and consumes quite a lot of current. If you have a few of these on at the same time, it would draw a considerable amount of current.

You can see the 4-bit input A, B, C, D of all 3 displays are being twisted together. The other 2 sets of wires are the latch strobe input and blanking input for each display. 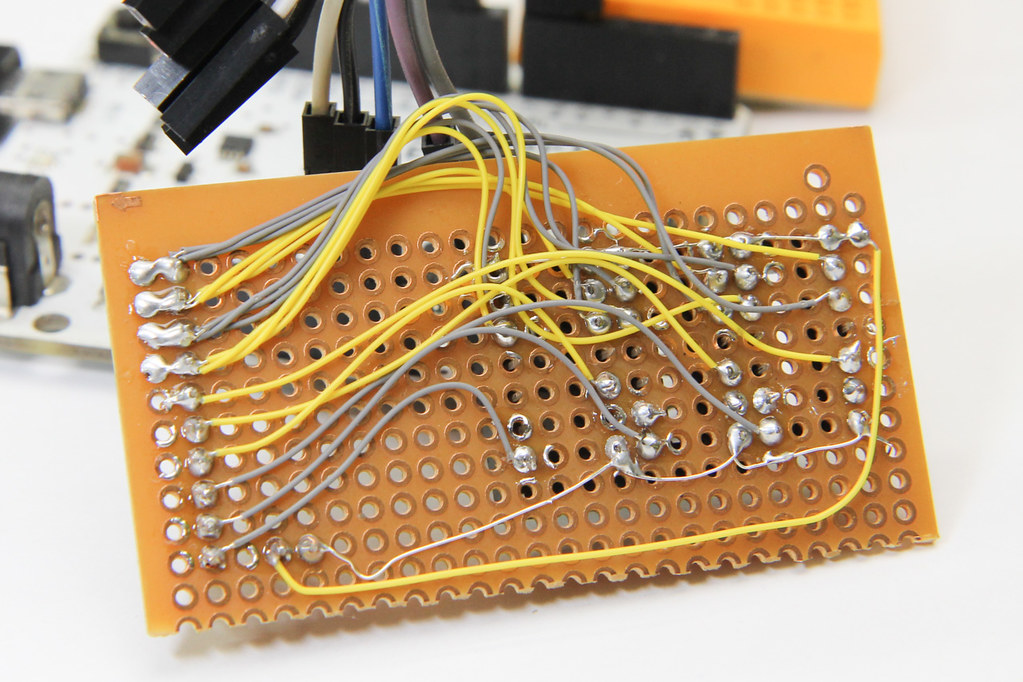 I’m looking to design a display board that would fit at least 4 digits, which would ease interfacing to a microcontroller. I think it’s only fitting that I limit myself to use 7400 and 4000 logic chips, as opposed to slapping on a microcontroller.

I also picked up one of these QDSP-6064 bubble displays. These are also no longer in production. The unique thing about this display is the use of these magnifier bubbles, hence its name the “bubble display”.

Apparently this type of display was rather popular back in the day, as evidenced by other similar displays. Here’s a photo of the DL3422, DL2416, and DL1414 displays, side by side. The HP-01 watch from 1977 seemed to use such displays too. 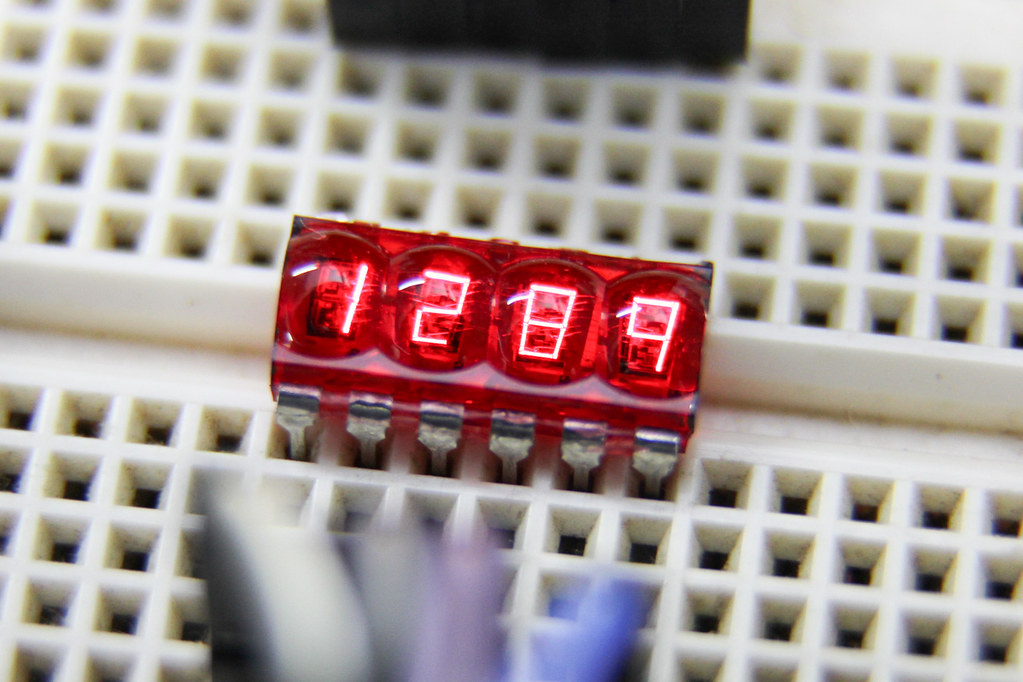 The edges of segments meet at sharp angles, adding to that old style display look. I briefly commented on a similar display a while back on Google+:

The displays that you see here were made in Malaysia, in 1999. I am not sure how they managed to keep the pins so shiny and new. These are also still in that un-bent state, where the pins are bent slightly outwards, just as most ICs would be when they come out of the factory. 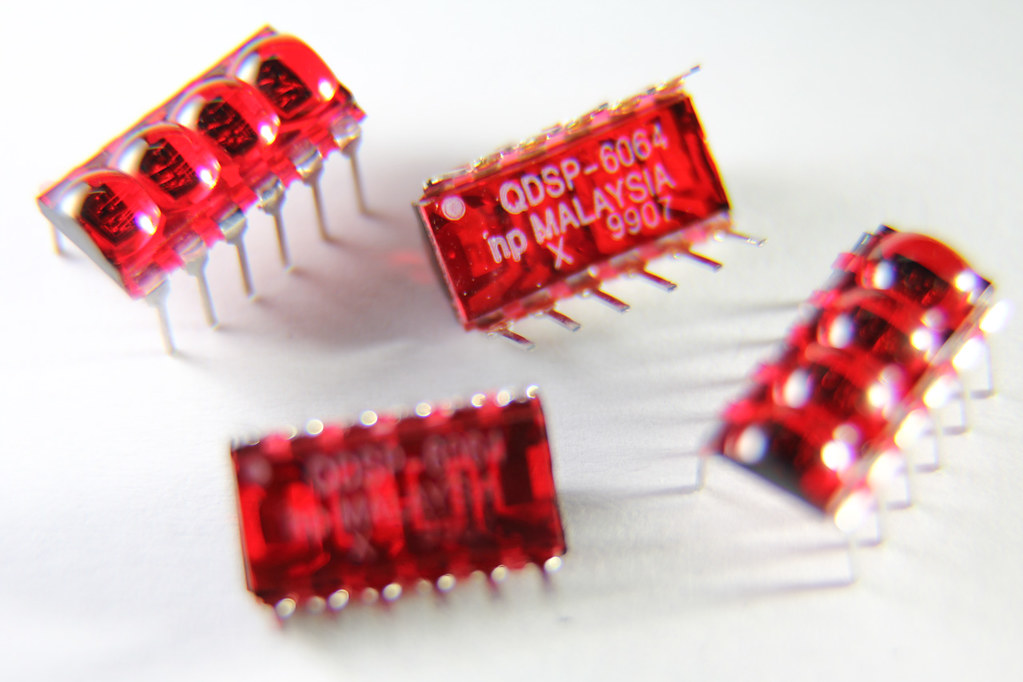 You drive these displays like you would any common-cathode 7-segment displays. The display that you see here is being driven by the Holtek HT16K33 chip, the same one used by Adafruit in their LED display backpacks. I’ll write more about this chip in a separate post. This chip is meant to drive common-cathode displays, which the QDSP-6064 is. You communicate with the chip over I2C. It also has inherent current limiting on its output pins, avoiding the need for current-limiting resistors on each segment. 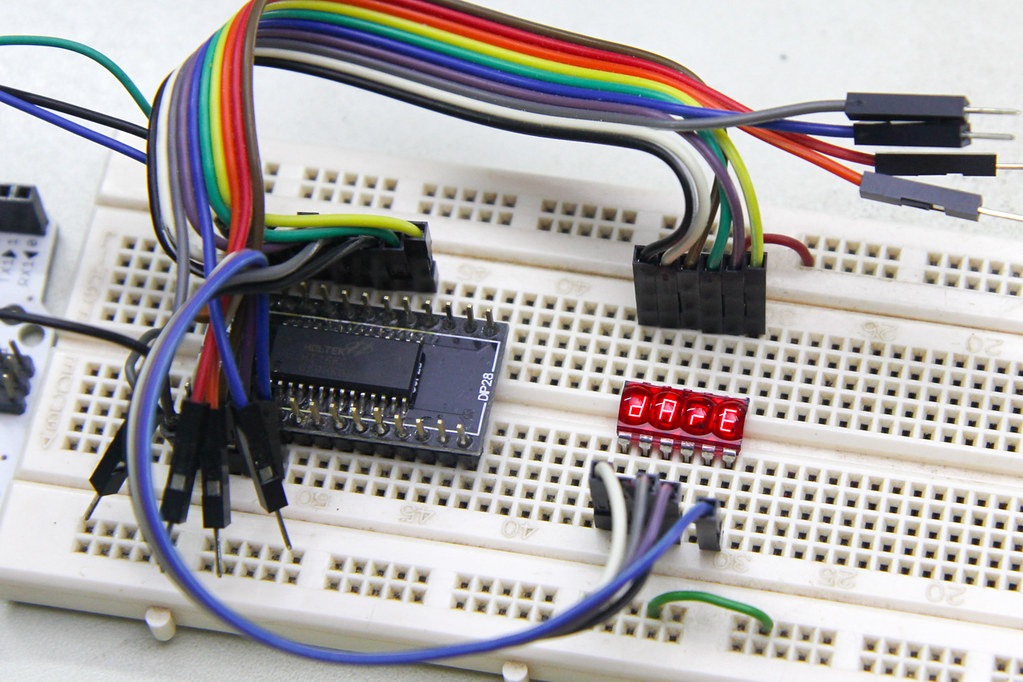 Unlike the TIL311, the QDSP-6064 has no logic circuitry built-in. I wrote a post about driving 7-segment displays previously, but as I have mentioned, it really depends on your application. If you have a microcontroller with 7+4 pins, you might choose to drive the display directly.

Because this is just a regular 7-segment display, you are not limited to displaying only hex digits. You can also display simple words instead of just numbers: 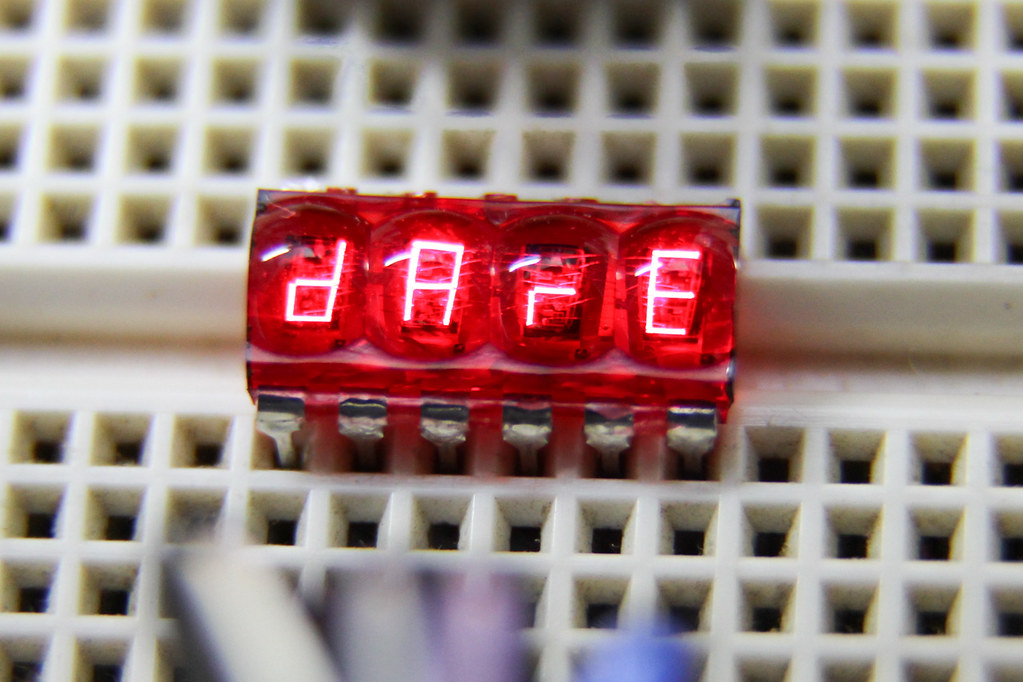 If you liked these displays, you might also want to check out some other types of retro displays: http://www.decadecounter.com/vta/tubepage.php?item=33

If you prefer the dot matrix type displays, the Hackaday crowd also suggested looking at the HCMS-2965. I saw a post on NYC Resistor in 2010 about a similar display, the HDSP-2111, but it was really pricey then. It still is pricey now — 30+ USD in single quantities. I can’t imagine building a display panel made up of these displays. The HCMS-2965 looks like a cheaper alternative at about half the cost.

I have no idea what I would do with these retro displays yet, but I just had to buy them!

If you are interested in a TIL311 display board, do leave a comment or drop me an email. I’d love to hear from you.